Swinging on the Well-Being Pendulum

or How to Enjoy Suffering and Suffer Joy

The Path to Full Spectrum Acceptance

Here in the Postmodern West mired in the totalitarian gridlock of coronavirus, we’re experiencing a crashing tidal wave of techno-stress and agora-loneliness. We have built a flabbergasting array of tools to prevent and assuage suffering and to connect each of us to just about anyone else. And yet, by any account, we are no happier.

The Anxiety & Depression Association of America estimates that 18.1% of adult Americans suffer from anxiety disorders, of which depression is one. No doubt these stats are outdated and vastly underestimate the current state of despair and mental illness.

But aren’t we happier now?

Is this 18% more or less than before? More than during the Great War? More than during the Black Death? More than during the Vietnam War and the concurrent Cultural Revolution? It’s hard to say. We are a lot better at counting than we used to be, thanks to all these computers, AIs, and algorithms crunching our Big Data. And we’ll certainly be able to monitor trends in our aggregate well-being from now on, but knowing whether we are subjectively better off in the Age of Information than we were in the Industrial Age is impossible.

Objectively speaking, the quality of human life has improved drastically since we stopped with the global genocides in the 1940s. Infant mortality, disease, famine, drought, even minor discomfort are at all-time lows today, while per capita GDP, life expectancy, and disposable income are soaring. The numbers are in; we’re better off. And we’re doubling down on data, tracking the habits and activity of more humans and the status of our environment in more flavors and with more sensitivity and breadth than ever before. But the quality of life on Earth more generally is another question entirely. Are the trees better off now? The birds in the trees? The fish and their greying reefs? I’m seeing and hearing positively resounding negatories on these and just about all other ecological accounts.

Ecological disaster aside, why aren’t we ecstatic?

Quite simply, we can’t be, not in aggregate. Ecstasy is a relative quality, defined by its opposite in polarity, which I would surmise to be misery. Without misery, ecstasy is meaningless and unreal. So some of us are ecstatic, and some are miserable. We haven’t worked out all the maths yet, but rest assured that general relativity holds balanced much more than the path of photons through gravity-curved spacetime. Philosophers of various ilks refer to relativity as duality, and to absolute and ultimate reality as non-duality. In a world without misery, there is also no ecstasy. These are mutually defining opposites, like hot and cold.

The 42nd verse of the Tao Te Ching (sagely rendered in English by Ursula K. Le Guin) puts it poignantly:

Rainbows aren’t as beautiful without red, orange and yellow.

For each of these dualities we can picture a pendulum swinging between extremes, oscillating sinusoidally. Despair lies buried at the bottom of the pit of suffering, while bliss (आनन्द, ānanda) perches atop the peak of enjoyment. We can begin to glimpse the intricate dance of being as we overlay and interlace the oscillations of all these pendulums. An experience can be hot and enjoyable. Or we can suffer cold. The two bear three. With this grand perspective, one can ask: what is well-being? Within the set of the “ten thousand things” (which is meant to signify the many permutations of nature and reality), what things do we pursue? Which do we choose? Is it well-being to select experiences of our essence and existence wherein we avoid the less enjoyable half of the states? Or is it well-being to experience the fullness of as many spectra as we can? Could it be our destiny to wrap our pitiless bodies around the pendulum arm and swing to the moon and back? 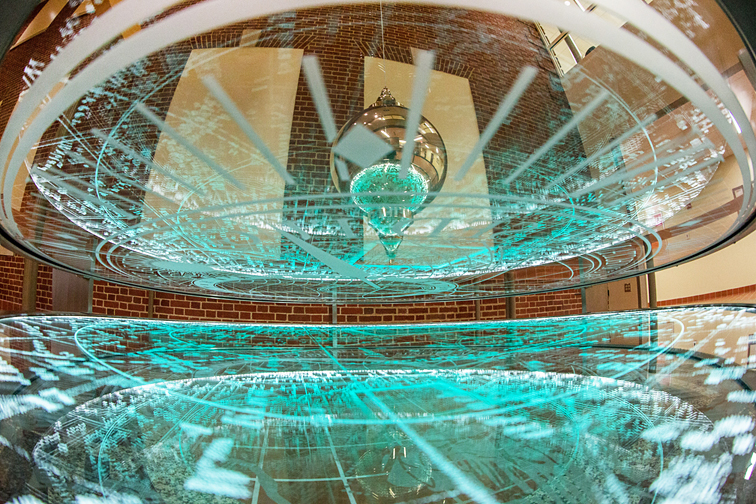 I am not one who answers questions. Love is the answer. I only raise these questions to give us opportunities to sculpt and mold love into new shapes and forms.

Indeed, we can learn to love our depression and our anxiety. In doing so, we no longer have a problem to fix; we are no longer ill, but well. For well-being too is defined by its mutual opposite: ill-being. Well-being is not the absence of suffering, but the acceptance of both suffering and its essential partner, enjoyment. Accepting what is allows us to eliminate craving, desire, and attachment. And this is the end of suffering, says the Buddha. From the perspective of non-duality, suffering ends where it starts. It starts where it springs from the void of possibility (the realm of non-being where we rest in deep sleep each night and where our dead reside) into being (essence, then existence) as the balancing opposite of enjoyment. Consequently we can know the end of suffering when we see its beginning and accept that which is (तथाता, tathātā).

A simple notion may be arising from this nest of paradox. Perhaps well-being does not arise from well-doing. What if there is nothing to do that will help us toward well-being? Instead, we might embrace inaction (無爲, wú wéi).

Peer into the black hole of present stillness
Unearned understanding snake bites
Witness sprouts of self-awareness
Springing up through soil, between toes
Remember the countless dead from which new life springs
Being and non-being eat and poop each other
Suffer joy and enjoy suffering