I Ching and the Elements of Time

A peek at the Book of Changes

A headlong dive into the divine

This week was riddled with coincidence. I’ll not bore you with the details. Like so many dreams told or acid trips recounted, the meaning is already lost even on me.

You see, I have begun listening to Terence McKenna, that whirring dynamo of timewaves and historical embellishment through lateral induction. Initially I resisted his rather grating nasal tones. (I wasn’t ready for the message, and I doubt if anyone is ever truly ready to encounter Terence McKenna.)

Timeless gratitude to those who record and publish the wanderings of the scrying minds of yesteryear to YouTube and otherwise. The recordings of McKenna, Alan Watts, and Joseph Campbell lie in wait, bobbing in a seemingly bottomless well of wisdom, insight, and wonderment freely available to all of us. It wasn’t always this way. We used to have to learn Sanskrit and Mandarin, spend a decade in the Amazon, and decipher cuneiform and hieroglyphics to gain understanding of such magnitude and profundity. It’s no wonder few did.

Returning to center, one of the innumerable of avenues of wonder I have skipped down briefly with Terence has been the I Ching. As one of the oldest written works, if not the oldest, the I Ching holds an ancient message which the western world has only just begun to decipher. Translations and commentaries vary greatly in approach, tone, and execution, some taking a succinct Taoist slant, others emphasizing Confucian politics, or even drawing on the Latin interpretations of the Jesuits. Indeed as texts have bobbed about in the waves of time, they have undergone both subtle and drastic transformations and recapitulations.

Within moments of deciding to research the I Ching, I have dug myself underground. Let’s take this slowly, start with the familiar, and use the Buddy System. The Bard is everyone’s buddy when it comes to traipsing through the numinous and deciphering the arcane. McKenna discovered the I Ching during his teenage reading of Carl Jung, whose own interest in the I Ching and its 64 hexagrams had a profound impact on the system of 64 archetypes he would develop through his life, and led him to coin the term and formulate the concept of synchronicity. Here lies a rich vein.

McKenna points us to another: could the permutations of the I Ching represent a kind of periodic table of situations? He posits that while we in the West were decoding the mysteries of matter and energy, culminating in two World Wars, and ushering in the Nuclear Age, the Chinese were devising a taxonomy of happenings, or perhaps prototyping time itself in this Book of Changes. Another I Ching proponent/devotee, author Will Buckingham, casts it as an uncertainty machine, which immediately evokes Douglas Adams' infinite improbability drive. Perhaps no answers lie within the Book of Changes, but rather it compels us to ask the questions and listen more intently.

Cannonball into the Divine

To encounter the I Ching all at once, bound in a book, is a bit like trying to drink the ocean. You may want a straw, but it’s not going to help much. (Little known fact, at time of writing, the ocean is 23.7% straws. End of days, jk. I refer you to Recapture the Rapture with Jamie Wheal.)

Anyway here’s a spoon. I’d like to offer you a sample of the I Ching. Or rather the whole thing, but carefully delivered in snackable, palatable bites, fresh from the Oracle’s all-seeing through your third peeper, down the hatch, deeper and deeper until they find a seat in the gut of your soul to slosh about in the bottomless well of being.

I call it Nameless.

Edit: previously I had annotated a coin reading as I flipped, then linked you to this lovely open source online I Ching from @ablwr. You’re welcome to continue down this now dusty path, but I think you’ll find Nameless considerably more engaging.

With apps like this, you can bask in the glorious precognition of the I Ching without the intimidating cognitive overhead, and without coins or yarrow stalks, which I haven’t tripped upon yet, though ‘tis nearly the season.

Back in the day before Nameless I’d have been using the 3-coin method, then requesting the corresponding hexagram from @Velfi’s command-line-accessible I Ching library written in Rust. There was a subsequent span where I traveled with one bag and enjoyed an Android app called Deepware Changes for divination on the go. You may notice as I did that this is a rather robotic oracle.

Back to the dusty path…

First we need a question. For months, years even, I have been struggling to find the proper tone this new site, this supposed atlas for the Atman. Let’s get that resolved so we can move forward!

How shall I approach writing for Atmanaut?

Is this question open-ended? Pertinent to now? Worthy of fifteen minutes? Yes, yes, yes. Then it’s ripe for the ancient cleromancy that is the I Ching.

If you could ask Fuxi how this whole I Ching thing works, you might hear something like this: 無極 (wuji, the Limitless) which is also 太極 (taiji, the Absolute), draws a ring around itself, within which 太極 becomes a pair of opposites 陰陽 (yin and yang), each forming and consuming the other. These interpenetrating, co-defining lovers at war couple and recouple to form eight trigrams 八卦 (bagua). The bagua represent the seasons, the flavors, the colors, the directions, the numbers, the elements of being. The bagua variously pair into 64 hexagrams, which are the permutations of being becoming itself, the archetypal events that make up the process of awareness, aka the Changes.

What I want to do is to divine which of these situations I find myself in and how it will develop with respect to the question I have raised. So I must open my mind to the realm of possibilities and manifest the answer, using some subtle medium to disguise the truth as random chance. Over the centuries a process of counting fifty yarrow stalks has been developed to divine the applicable hexagrams, which introduces a certain weighted probability to the array of possibilities. When fifty yarrow stalks are not available, many practitioners flip coins, which yields different probabilities, while variations in the coin tossing process weights the probabilities differently. Here today, I’ll follow a common coin process that yields values and probabilities close to the yarrow stalk process. (Edit: there are coin flip methods that mirror the probability field of yarrow stalks with mathematical exactness. For more I refer you to Stuart M Anderson’s proof. Nameless encodes the faithful 4-coin method algorithmically.)

Tossing three coins six times I will generate six lines of a hexagram, starting at the bottom. Each coin is a binary system consisting of two opposites: heads and tails, yang and yin. We’ll assign yang to heads and give it a value of 3. Tails is yin and is worth 2.

After tossing the three coins, we’ll have a total of 6, 7, 8, or 9. Each of these values corresponds to a different line. Each line in a hexagram is either young or old, and either yang or yin (whole or broken). I notice the 汉字 (hànzì) for the broken and whole values are themselves broken and whole.

Relaying this to the Rust library via CLI yields: 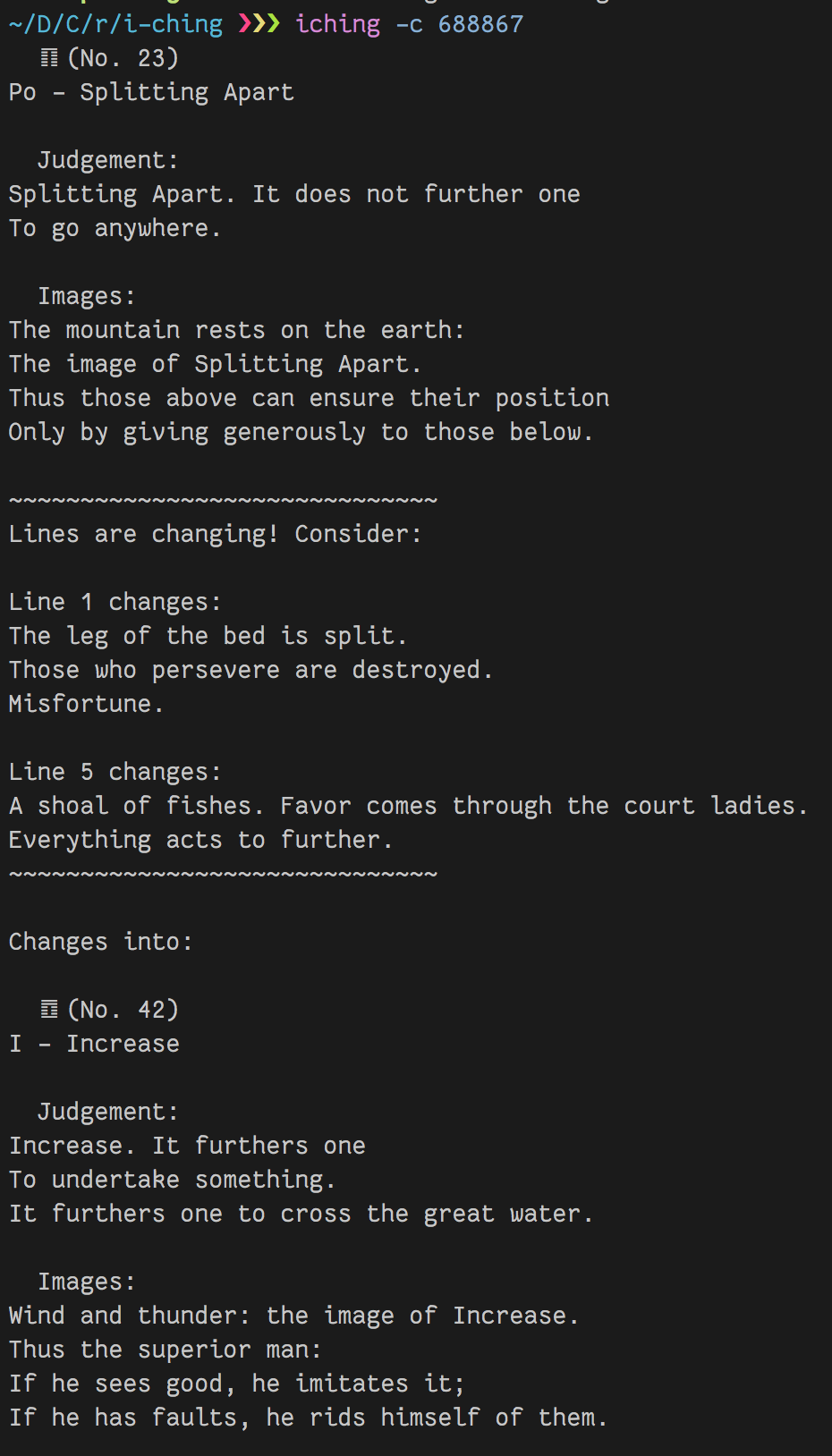 Looks like it might be time to chill on this post and do something else for a bit. “The leg of the bed is split.” That doesn’t bode well.

You’ll probably note as I have that many of the translations use an anonymous masculine subject. So far as I have seen, we could substitute “one” for “man” without issue. (Edit: By default Nameless provides a genderless transmutation of the popular but dated Wilhelm-Barnes translation. You may also choose to reinstate the gendered language with the flip of a switch.)

I, for one, keep my eyes peeled for yarrow stalks (which have oodles of uses) as I jog the creek amidst the fading spring. With stalks or coins in hand, I direct my glowing orb of awareness over to the control panel at the uncertainty machine within the realm of possibilities. A question arises. I either intend to focus upon it or let it pass. With the coins or the stalks I manifest one of the 64 guaxiang, a hexagram, six lines, one at a time. Each line is active or receptive, strong or yielding, rigid or flexible, broken or solid, yin or yang, old or young, changing or steady. As the lines stack up, so do two trigrams of the 八卦 (bagua), eight glyphs which, to my untrained eye, form the backbone of esoteric symbolism in Chinese philosophy. As I partly mentioned, the bagua map neatly to binary numbers, chakras, colors, planets, actions, body parts, qualities, images of nature, animals, artifacts, family members, and of course 汉字 (hànzì). This is a playful space rich with pseudoscience and superstition, but one that may bear a fundamental truth about the nature of duality, or rather about its artificiality.

We assume a tossed coin has an equal chance of landing on either of its two sides. These US quarters have a head on one side, which we’ll call yang, and assign a value of 1, while the other side will correspond to yin, with a value of 0. This way, each time I flip a coin, it will resolve to yin or yang, with a value of 0 or 1. Three two-sided coins flipped in succession can land 2 times 2 times 2 ways (which is to say 2 to the 3rd power or 8 ways).

To select one of 64 permutations with equal probability, we could flip six coins in succession, as 2 to the 6th power is 64. But in casting lots for the I Ching, we are not only manifesting one of 64 hexagrams, but an interwoven relationship between two of the 64. For this we need more computing power. Hence the extra coins.

These days the only coins I carry are Bitcoins, so I keep my oracle with them as an app on my homescreen. Nameless is also a fully functional progressive web app, so if you save it to your home screen, it’s available offline, yours to keep.

I wish you the best of luck. May the oracle shine favor upon you.